We’ve had a really busy couple of weeks since the last ChangeLog. There were two Review Board releases, a small setback with RB-Gateway, and lots of testing and infrastructure work for RBCommons 3.0.

Last week, we put out Review Board 3.0.4, a feature-packed release introducing:

It was a pretty great release, fulfilling a lot of feature requests we’ve had for a while an providing the foundation for some new work we’re doing. Unfortunately, there was a last-minute error that, in production, broke part of the form for repository configuration.

Now, we’ve found most people don’t upgrade the same day that a release goes out (downtime must be scheduled, people are busy, etc.) so we mostly started hearing about it two days later. As soon as we realized the mistake, we quickly got a new release out, Review Board 3.0.5, and put some changes in place to help prevent this sort of last-minute problem from happening again.

Review Board 3.0.6 is currently scheduled for April 10th. I’m expecting it to go smoothly.

RB-Gateway, our API wrapper around Git and Mercurial repositories, was supposed to release, well, today. Sadly, that’s not happening.

Let me back up. RB-Gateway is written in Go, unlike most of our projects which are Python-based. Go was chosen partly due to concurrency benefits for handling and serving up requests, and partly for its ease of cross-compilation and distribution (just drop it into a directory and run it on any supported platform).

It’s the cross-compilation that posed a problem. We use git2go, a Go wrapper around libgit2, a C library for talking to Git repositories. We don’t need a lot from it, but it made sense to “go” with that (sorry).

Problem is, including a C library makes cross-compilation much harder, and there’s threads full of discussions on issues with compiling and utilizing git2go in production, depending on how it’s compiled and used. So we’re planning to remove git2go usage.

Instead, we’re evaluating other Git libraries. We probably won’t roll our own, but as we don’t really need much from a Go library, we’ll “go” that route if we need to (sorry).

When that’s done, we should be ready to release.

This Friday, we’re beginning an upgrade of RBCommons, bringing many of the features of Review Board 3.0 to the service. We’ve spent much of this week getting this ready — rebuilding servers, testing database migrations, running through checklists of manual feature tests, etc.

There’s going to be a lot to love in this release, but those following Review Board development will surely notice that some features (such as Slack, Asana, etc. integrations) will not be there on launch. We have just a bit more work to do before those are ready. We want those as much as anybody, so they’re high up on the priority list.

The upgrade should be smooth, and we should be back up in only a few hours, but just in case, we’re leaving the maintenance window open through Sunday. We aimed for a holiday weekend (well, holiday for a lot of people, anyway) to reduce the impact on users. 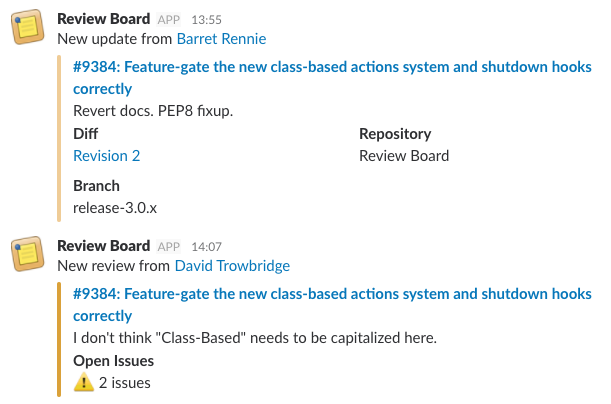