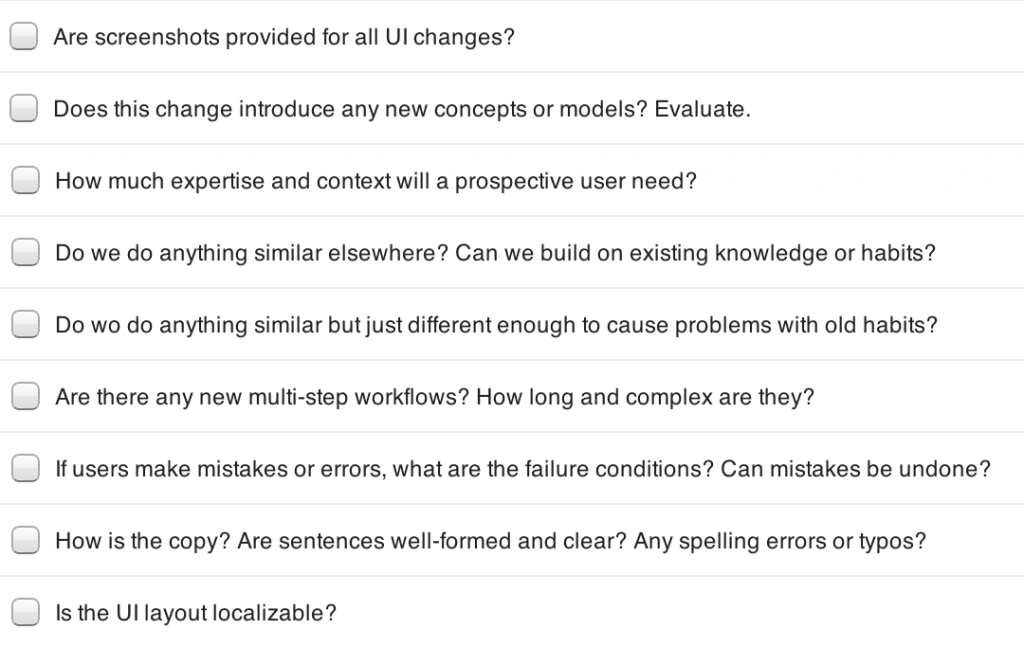 Obviously, not everything is applicable for every change. If the review request isn’t making any changes to UI, then I’ll skip the first two checklists entirely. If a change is a bug fix, I typically won’t review it for architecture and design principles.

Once I’ve figured out which of my checklists apply to any given change, I sort them to focus on the biggest stuff first. If I have major architectural objections with a new piece of code, it’s probably not worth reading through it looking for bugs or style guide violations. One of the worst things I’ve encountered (on both sides of the code review process) is working through a ton of small issues before realizing that everything has to be rewritten.

Working through the big stuff first also facilitates collaboration, because it’s clear at each stage how negotiable my comments are. Architecture can be argued about for a long time, and in the end a lot of it is a personal decision on behalf of the person writing the code. On the other hand, if there’s a lurking crash bug, it’s not an option whether or not to fix it.

I didn’t know what to expect when I first started applying checklists to my code review process. I anticipated that it would slow down my reviews quite a bit, but I didn’t know what the payoff was. I was pleasantly surprised to discover that it improved the quality of my reviews immensely, and after a few months of application, the amount of time I had to spend reviewing was almost the same as it was before.

My approach is to do a pass through the code for each and every item in the checklist. By only looking for a very specific type of defect, each pass goes relatively quickly, even for large changes. Focusing on only one type of defect allows an extreme focus that makes it trivial to find issues. One good example is scanning for (most) memory leaks: simply check each allocation for its equivalent deallocation, and verify that all code paths will go through that point. Even for large changes, a pass looking for memory leaks might take 5-10 minutes. Compare that to the last time you tried to chase down a leak after the fact, and the payoff is obvious.

In contrast, I find it incredibly difficult and error prone for me to read through code once looking for memory leaks and UI design issues and API usability and possible cross-platform build issues and everything else all at the same time.

I personally feel like when I pull out my checklists, my code reviews are much higher quality. My coworkers have also commented that they find my reviews to be pretty good, so I’m hoping it’s not imaginary.

Do you use checklists for code review? How are they working for you?